In 1913, the existence of atmospheric ozone, forming the ozone layer, was demonstrated by Henri Buisson and Charles Fabry and its concentration is ten parts per million at an altitude of thirteen to forty kilometers. This ozone is useful, unlike ground-level ozone. Nature has a dynamic process of producing and destroying stratospheric ozone. During the day, the sun produces ozone by its UV rays and at night, ozone becomes oxygen again. As the night is longer in winter, the ozone hole increases during this period. 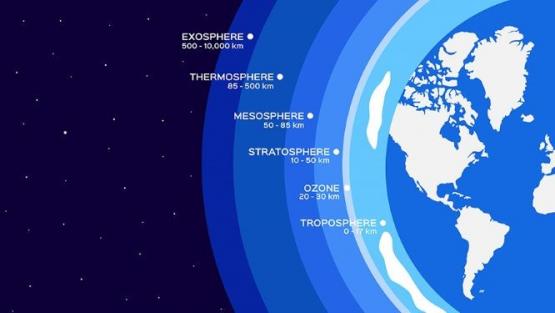 The ozone layer intercepts ninety-seven percent of UV radiation and half of all solar radiation; this makes it possible to keep the ground temperature warmer at ground level. The ozone layer is a protection against the UV rays of the sun for all that lives on the Earth. The ozone layer is distributed all around the Earth. In 1930, Sydney Chapman showed the process by which UV rays form atmospheric ozone from oxygen molecules.

Ozone amount data are from the Total Ozone Mapping Spectrometer (TOMS) and the data vary widely by season. On the other hand, the variations from one year to the next are less important than these variations between the seasons.

In the central part of the Earth, between latitudes sixty-five north and south, ozone has varied enormously since 1980. This variation follows an annual cycle. Researchers, such as Paul Josef Crutzen, have found threats to ozone before 1974 when Frank Sherwood Rowland and Mario J. Molina showed that CFCs were acting to destroy ozone, while other researchers had found other evil elements. Producers of CFCs, like the multinational DuPont, made their lives tough, but the decision of the US Academy of Sciences in 1976 settled the pseudo-scientific debate. The Nobel Prize in Chemistry devised these discoveries in 1995.

In summary, science had proven that CFCs destroy atmospheric ozone.

‹ A summary report for decision makers up Ultraviolet rays ›