The Family in China

In previous articles, I talked about my life in China, comparing it to the life in Quebec. Today I want to talk about the Chinese family in general and my new family.

When I arrived in China in August 2003, I wanted to change my life, but far from me was to change my marital status! By step, I have come to desire to have a family.

In China, the family is very important and to have a family means to marry. Generally, the groom is responsible for everything from buying the condo to establish the nest, organize the wedding and provide the economic conditions of family life.

A traditional family in China

In the discussion about my dream of a family in China, I stumbled to two main problems: my age and the fact of not being able to buy this condo, a sign of economic security for the new family. theseproblems if they were not raised by my friend, they were by her friends or her parents.

The family operates at three levels:

The father, or the oldest male, is the chief and his opinion is required on all major decisions in the life of each member. It is the same at each level. It comes from Confucius (551-479) requirements. My wife had a daughter, I am the head of the family unit of three. But I am subject to the family and its leader. 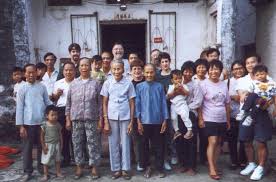 A Chinese farm family,like the one of my wife

In the family, the couple occupies a very important place. In China, the younger women marry at 25 and they have a child within a year. Before deciding to marry, young Chinese have no or little sex; it has nothing to do with religious prescriptions, few Chinese being involved in a religion.

By cons, when both partners have decided to get married, everything is allowed between them, while accepting the social boundaries, that is to say that nothing should appear in public. This is how my wife does not want to kiss me in public, otherwise we sometimes hold hands. By cons, in our home, everything is permitted at any time of day, while closing the curtains!

The traditional Chinese family is a very strong institution, even the fundamental support of the company. I know the situation is very different in Quebec, where 70% of school-age children live with a single parent. InChina, the only child lives with both parents and often grandparents. The Chinese do not understand our behavior, but our previous generations werelike this too. 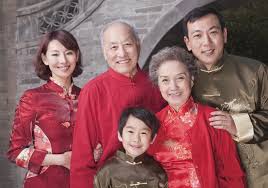 In China, the parents care for their children without public daycare or very little. The grandparents need to care for the child while the parents work. They accompany him for the school. During the days off, they bring him at the park. They finance their education and guide without time limit. 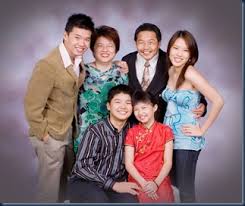 Later, the child will watch over his parents and ensure their old age. He is responsible for supporting their economic needs and ensuring their well-being, including their health; hospitalized patients receive their food from their parents! 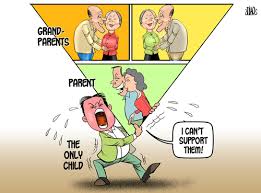 China is beginning with some social programs, all abolished in the late 1970s with economic renewal. Today, in the big cities of the coast, education, health and social security are almost 100% the family responsibility. The government intervenes only very little, a bit like in the Duplessis time in Quebec.

Today, Québec (such as Canada and the USA) looks like a socialist and communist country where everything is decided by the government, while China is a Confucian capitalist country based on the family.

‹ Some Comparisons Between China and Québec up Short Sentenses in Chinese ›