I read an interesting book about China. It is from a French group: the Foundation for National Defence Studies that producedit in 1983: China to the world. So it's a French vision of the international strategy involving international politics, but it also affects many of China's domestic policy, because the two are going together.

They say that China has had three major policies:

At the Liberation, in October 1949, with the proclamation of the People's Republic of China, the Cold War situation dominated the global landscape. To ensure its safety before the all-powerful USA who occupied Japan, Taiwan and the rest of South Asia, the new China had to seek protection from its Soviet neighbor. 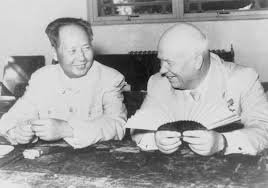 Obviously, this protection cost China dearly, very dearly, not only in foreign currencies. In particular, their ideology that Mao did not like. This period prepared the conflict between the two communist brothers. And this is the originality of the Maoist vision I remember. 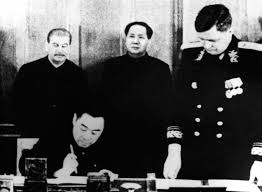 In 1946, in his talks with journalist Anne Louis Strong, Mao had already mentioned between the two superpowers, the USA and USSR, there was a huge area encompassing the capitalist countries, colonial and semi-colonial, Europe, in Asia and Africa. This area was divided itself into two intermediate areas:

"The first category groups independent countries and countries in their struggle for independence in Asia, Africa and Latin America. The second extends to the whole of Western Europe, Oceania Canada and the capitalist countries which form the second intermediate zone.»

In April 1974, Deng Xiaoping at the UN formally presented the vision of the three worlds.

Under previous empires, China also had a vision of three worlds:

Difficult to summarize a book of 250 pages. Better to read it!

I take three policies with the vision of the three worlds:

In January 1975, before the National People's Congress, Zhou Enlai presented the four modernizations: agriculture, technology, national defense, and science and technology. It was his political testament.

Deng and the 4 modernizations

Zhou also introduced Deng and other leaders of 1955 to major government posts. This was the team that took over the power from the "Gang of Four" in 1976, less than a month after the death of Mao.

‹ The Second Obama Administration up China is Out, The Philippines are In! ›